What is a Virus Exactly? 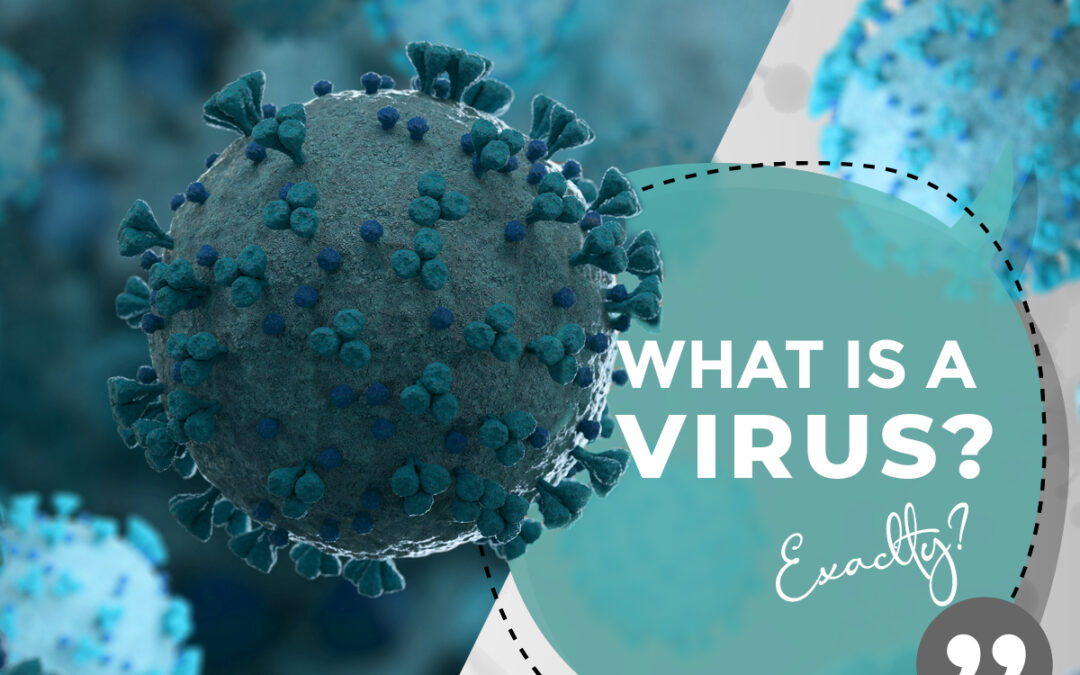 A virus is an infectious microbe which cannot replicate on its own and must be in a host to divide and replicate themselves.  It consists of either a strand of DNA or RNA, which is surrounded by a protein coat.

Sometimes the viruses even surround the coat with an envelope and that gives the virus extra protection.

Viruses enter the body via the nose or throat.  They can be directly inhaled, which is the most common way, in small droplets from people that are infected with a virus and they are then spreading the virus in that fashion, however they can also be attached to surfaces and survive for a prolonged period of time, which implicates that should someone touch the surface and thereafter touch either your eyes or nose the virus can transmit in that fashion you’ll be amazed how often in a day all of us actually touch our noses and our throats on the whole viruses until they have settled down in the body and connected with the host cells, are reasonably fragile hence they are very sensitive to sanitization, infrared etc.  we know that viruses have commonality as well as differences for instance the polio virus have RNA Genomes and some, like the herpes virus have DNA Genomes furthermore some viruses like the influenza virus have a singled stranded genome while others like smallpox have double standard genomes.

To consider this question, we need to have a good understanding of what is meant by life although most biologist would agree that all living organisms exhibit some key properties.  They can grow, reproduce, maintain an internal homeostasis, respond to stimuli, carry out various metabolic processes in addition populations of living organisms evolve over time.  Do viruses conform to these criteria? probably not.  We do however realise that viruses can reproduce in some way.  Viruses can evolve over time, hence the fact that we need to get a flu vaccine every year because the viruses change their character.  Viruses however do not carry out metabolic processes most notably viruses differ from living organisms in that they cannot generate ATP or energy.  They do not possess ribosomes and cannot independently form proteins from molecules of messenger RNA, hence the fact that they can only replicate in a living cell host.  What we do know is that viruses have been around for a long time as certain fossils, which were millions of years old, were found to have remnants of viruses.  Scientists have hypothesized that viruses may be dependence of more complex ancestors.  They propagate that the autonomous organisms initially developed the symbiotic relationship overtime the relationship turned parasitic, as one organism became more and more dependent on the other as the ones free living parasite became more dependent on the host, it lost its previous essential genes to replicate itself.  Eventually it was unable to replicate independently, becoming an obligate intracellular parasite called “The Virus”.

Louis Pasteur was unable to find the causative agent for the illness rabies and speculated about the pathogen too small to be detected by microscopes.  At that stage they only had light microscopes and could not see particles as small as viruses.  Viruses are less than 200 nanometres, there are however recently discovered viruses that are up to 750 nanometres.  An English Scientist, Charles Chamberland, invented the Chamberland Filter, with Louis Pasteur, or it was also called the Pasteur Chamberland Filter.

The pores of this filter were small enough to remove all bacteria from a solution that parts through it.

In 1892 a Russian Biologist, Dmitri Ivanovich, found that, when he made a crushed leave extract from a tobacco mosaic virus found on tobacco plants, that infected and destroyed the tobacco plants, passed it through the Chamberland filter, the extract on the distal side could still infect bacteria. This confirmed a pathogen that was much smaller than was known at that time.  He made a sensible assumption that it could be a toxin which passed through which was secreted by the bacteria.  He did however not pursue the idea further.

A Dutch Scientist, Martinus Beijerinck, repeated the experiments and found that an organism so small that it could not be observed, was the causative organism of the virus on the tobacco plants and he named it “Virus”.  It was not until the 1930’s and the development of the electron microscope which could magnify exponentially higher than the light microscope that the first viruses were physically seen and identified.  In essence an electron microscope works in the form of a transmission of high voltage electron beam which is used to eliminate the specimen and create an image.  The electron beam is produced by an electron gun which is fitted with a tungsten filament.  These images can then either be seen or captured on photographic material or digitally.

Now that we are done with the nature of the enemy called virus in the next discussion, we will specifically discuss the differences between viruses that cause the common cold, influenza, and Covid-19, as well as how to differentiate between these different ailments and respond in a sensible way.

This site uses Akismet to reduce spam. Learn how your comment data is processed.